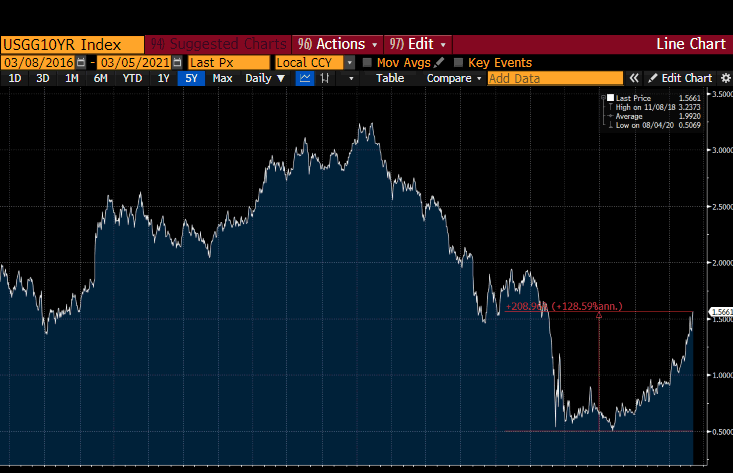 Treasury rates have been climbing steadily and reached their peak since March 2019 at 1.5661%, which is a threefold increase since the bottom during the peak of the covid pandemic last year (see below). This steady increase has resulted in a a volatile week for stock markets across the world.

The volatility has been caused owing to various reasons, chief being the rebalancing of portfolios. This can manifest itself in various formats such as shifting a higher allocation to bonds rather than stocks, as well as cashing in on the profits of tech stocks and investing in industries which are likely to see a boom soon (read hospitality and travel companies among others).

Many are fearing that the bull run of the stock markets, where anything and everything basically goes is over. I believe this to be true, however I still feel that we are far from a recession. Further, governments across the world will ensure that the economy gets back to prior covid levels before taking any drastic steps.

Looking ahead into the very close future, I suppose that unless any nouvelle news crops up, there is likely to be a short term boom in the markets after the $1.9T stimulus was approved. Now is a good time to invest in companies with long term prospects and cashing in on companies which were favored by the intricacies of the covid pandemic.

The Week That Was

Coming off fairly nice gains made during the early parts of the year, the major indexes retraced themselves to erase all gains of 2021. As mentioned above, this has been due to various reasons, which we will now look at in depth below.

The last few weeks has seen vaccinations role out with speed and alacrity, thus increasing consumer sentiment that better days are ahead for the global economy. Many nations across the world have also resumed normal operations, either because of herd immunity, low density of population, or well managed rollouts – the most notable being Iceland, India, and the UK.

This expectation of a better economy has led to a) governments reduce or recover the stimulus packages via various methods such as higher taxes or higher interest rates on government bonds (treasuries). This has reduced the luster of the stock markets, which usually provide non-guaranteed returns of around 7%. b) Many tech stocks which were enjoying favor with the capricious mistress that is covid are falling out of favor as investors believe that improving conditions will see people work from office and more importantly resume travel and vacations.

Majority of the indexes such as the S&P500 and the NASDAQ (which essentially contains new age tech companies) are heavily weighted towards tech companies (market cap weighted).

The fundamentals of a market weighted index is that they favor stocks which have a high market cap (i.e. stock price x no. of stocks issued). Considering that tech stocks saw a huge increase in their stock prices, this tilted the indexes towards the tech industry – which is seeing large number of sell offs owing to investors’ expectations of a better economy, resumption of travel, and work from office activities.

These sell offs have exacerbated the sell-offs to make things look worse than they actually are. A brief glance of Zoom Video Communications vs some of the travel firms will give you a better picture (see below)

Notice the downward trend of the tech companies as compared to the more traditional companies in hospitality or leisure. (1 Month – date range)

Other noteworthy events which affected markets was the announcement of the Fed that it will ensure that the job markets regain to pre-covid levels but stopping short of saying that it will not increase treasury rates. Lastly, the employment report shows that the economy is recovering. This led to the markets opening lower on Friday before recovering. Overall, the performance of the various indices can be summed up as below –

The Week That Will be

Personally, I beleive that we are still some way off from a recession or a market crash. However, the bull run has definitely finished. I forecast that the upcoming week will see a strong start owing to the recent passing of the $1.9T stimulus bill being passed, which addresses various healthcare covenants and is turning a nelson’s eye to previous stimulus packages received by citizens.

It is my belief that this is a purely political move (for various reasons), and that logic indicates that excess money will need to be taken out of circulation, necessitating an increase in treasury and tax rates sooner if not later.

I also feel that now is a good time to cash in on speculative investments and shift the portfolio allocation to long term investments. Infact I am slightly biased towards adopting a circulation strategy for the next year or so. In particular…

The next few weeks are sure to be interesting. It feels good to be alive during times when seismic shifts are taking place across industries and societies. Stay tuned for next weekends newsletter where I will begin coverage of international markets in addition to the usual fare.